Our End of Year Trip to Amsterdam

Instead of a meal and drinks in our hometown, the One One One Christmas party this year took place in Amsterdam.

Arriving at Schiphol airport at 9am, we took the train into the city centre and had breakfast at a lovely restaurant overlooking the river before exploring for a few hours. I might have opted for dessert for breakfast, but that’s beside the point.

A client of ours, Ali Ocakbasi has an array of authentic Turkish restaurants scattered around the globe – their most recent opening is situated in the centre of the city close to the famous Rembrandt Square. Naturally, this is where we chose to have lunch.

Specialising in grilled meats and authentic Anatolian cuisine– we were treated to a sample of every item on the menu. We were served everything from humus, Mediterranean salad with barbequed beef, to hand-ground lamb and chicken kebabs marinated in an array of spices, to koftas and rice served with delicious warm homemade bread. To finish, we had a selection of flaky pistachio baklava paired with the most delicious ice-cream I’ve ever had (flavour still unknown).

After our very indulgent (and delicious) lunch, we continued to explore the city. Thankfully it was only slightly colder than London and it wasn’t raining. We managed to fit in a boat trip along the canal and explore the Amsterdam Light Festival; much of which is only visible by boat. During December and January the Dutch capital is scattered with 36 light installations along the ‘water colours’ route; a boat path through the canals. 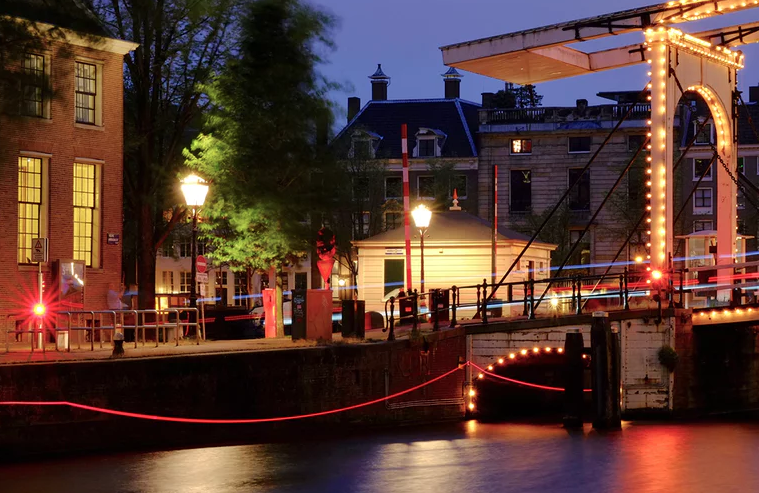 The theme for the light festival this year was ‘existential’. One installation by the world-renowned Chinese artist Ai Weiwei was particularly impressive. Named ‘Red Line’ and representing a ‘metaphorical and theoretical border’; it was presented in the form of a thin illuminous red ‘string’ delicately running its way through the city, through tree branches and light posts, and referred to by Weiwei as ‘the linking thread’. I highly recommend the trip, especially when it’s dark – it’s much more impressive, and prettier in my opinion.

The rest of the afternoon was spent exploring the shops and dipping in and out of authentic pubs, sampling the beers. Questionably, far too much time was spent in a rubber duck shop allocating our office mascot. Thankfully, with only an hour’s flight delay and a security ‘incident’ at Schiphol airport, we were back home (almost) on schedule.

If you ever find yourself in Amsterdam and craving delicious authentic Turkish cuisine, you can find Ali here: Herengracht 558, 1017 CG Amsterdam

Ali Ocakbasi is opening in London’s Leicester square next year. We’ll keep you posted with all the details.

If you’re in the Dutch capital this month or next, make sure to take the boat trip and explore the light show: www.amsterdamlightfestival.com