Pizza Hut has revealed they will be releasing a self-driving pizza truck in collaboration with Toyota. The Japanese manufacturer has announced the autonomous concept vehicle will be known as the ‘e-Palette’.

Available in 3 sizes, President of Toyota, Akio Toyoda has stated; “Today, you have to travel to the stores. In the future with e-Palette, the store will come to you.” 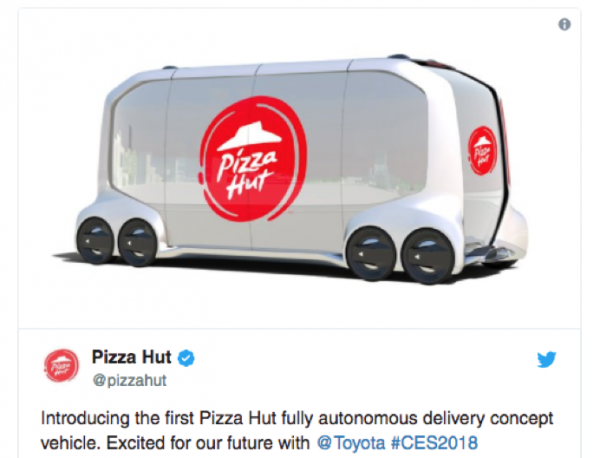 Instead of rejoicing at the news, the public have not been keen on the idea. Fans of the Netflix series Black Mirror will be aware that the episode titled ‘Crocodile’ features this exact dystopian creation. And it doesn’t end well. Craig Schaefer, a Twitter user commented ‘I can’t help but think there were better weeks for Pizza Hut to announce this. Like, for instance, not the same week as a Black Mirror episode involving an autonomous pizza truck’.

In response to the Twitter hysteria, Pizza Hut has acknowledged the public’s concern by posting on their official Twitter account; “Nah, we aren’t Fence’s” in reference to the fictional pizza brand featured in the series.

Does this mean the end to the delivery man? Pizza Hut’s U.S President Artie Starrs commented: “In our ongoing and relentless pursuit to own and define the modern pizza experience for our customers, we are focused on technology-based solutions that enable our team members and drivers to deliver even better customer experiences”. It seems we’re increasingly closer to that dystopian future, folks…at least there’s pizza?

Pizza Hut has revealed that testing of the e-Palette is expected to begin at the 2020 Olympics in Tokyo.