In my own humble opinion, it’s quite ridiculous that food goes in and out of style like velour tracksuits or the thickness of one’s eyebrows.

I never thought in my wildest food dreams that we would live in a world where one minute avocados are considered ‘on trend’ only to be replaced by pickled carrots the moment we turn a blind eye.

Who makes these decisions? Is there an annual boardroom meeting (if so, where’s my invite) where culinary royalty sit down over a glass of something fashionably delicious to govern what the public will loathe and love in the coming year? It will never cease to amaze me how kale can go virtually unheard of one century and then out of nowhere it’s the greatest thing since sliced bread (debatable). Genuine question; where had kale been hiding before we plucked it from obscurity?

I’ve done my research and this is what I have discovered; 2017 was the year of Great British Food. From scrambled eggs to fancy fry-ups; we were loving the modernised take on British food made with British ingredients from British producers and farmers. It was all very patriotic. Brunch came back with a vengeance – I like to liken it to Gary Barlow’s revival after a 10-year hiatus – powerful, seductive and mysterious.

Another 2017 trend; vegetarian options featured heavily on menus with kimchi and sauerkraut taking centre stage. It won’t have gone unnoticed how restaurants began catering towards those with allergies; paving the way for gluten-free options and vegan-friendly dishes. 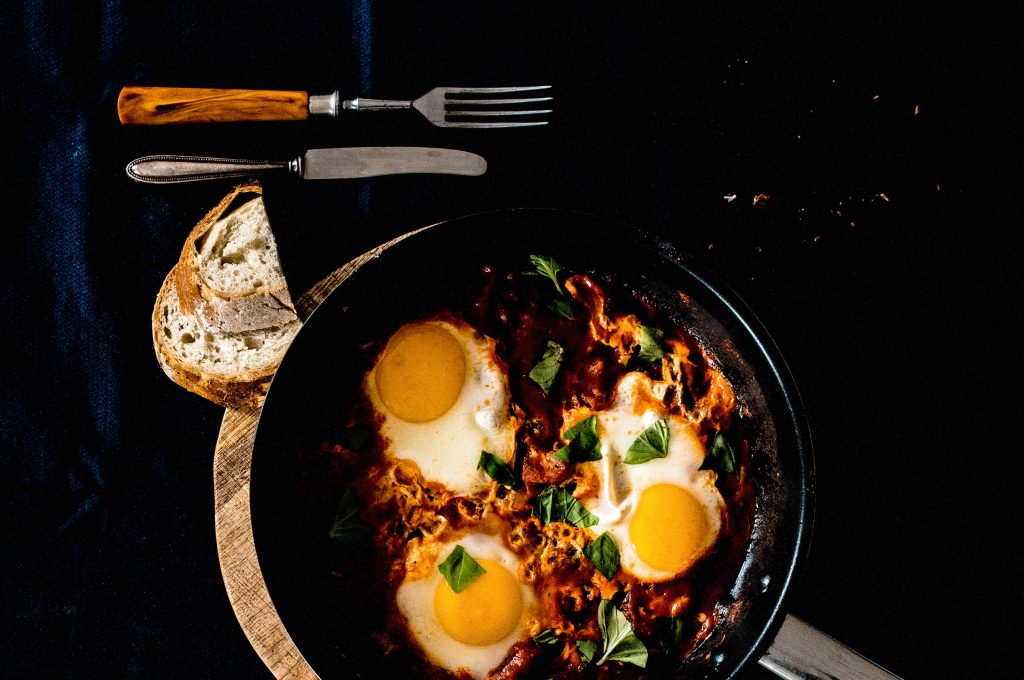 It’s so mainstream to be ‘suffering’ from a food allergy. I, myself suffer from them all. I’m very Spring/Summer 2017. I like to pair my intolerances with a side dish of self-pity.

Poke, the Hawaiian speciality, was Miss Popular this year. A safe option for the health-conscious. However, it’s popularity will cease to be as people have begun to realise that it’s nothing more than sushi in a bowl. And it’s overpriced. It’s also not filling and as pretty as it is, it’s only instagrammable once.

Here are some food predictions for 2018; a stratospherical rise in gut-friendly dishes and anti-inflammatory ingredients – queue turmeric, edible clays and mushroom tea- all of which are on the brink of making a grand Liza Minelli showbiz style entrance.

Shakshuka (above) – a middle eastern dish consisting of perfectly poached eggs, immersed in a comforting fiery fiesta of tomato, onion and pepper sauce is soon to be featuring on many a food menu. It’s a war on the taste buds and it’s about to enter our lives and our tummies in full force. In general, Syrian and Israeli influences are about to take over just like Royal Wedding Number 2.

Finally, apparently Filipino ‘adobo’ and ‘bagoong’ is soon to be a thing. I haven’t Googled. No idea. I’m sure we’ll be instagramming it by April.